One of the many, many reasons I love Halloween is that it reminds me to watch a scary movie.

Horror isn’t usually my genre of choice. In the big picture, I love having a time of year when it’s all right to be spooky, to be scared, and to be cleverly morbid before we Give Thanks, and then celebrate Christmas.

In years past, Megan and I have fixed shortcomings in our movie knowledge, like watching The Exorcist. This year, she and I watched The Babadook.

After the movie was over, I turned to Megan and said, “I still don’t get why that character has become a gay icon.”

She looked at me like I had grown a head — each wearing a black top hat — out of each shoulder.

“You never knew that The Babadook has become a kind of queer cultural icon?” I asked.

She shook her head, “I have no idea what you’re talking about.”

I came up with this Guardian article, and I’m a little ashamed I didn’t understand the Babadiscourse sooner.

I really liked the movie. Among the many reasons, I always enjoy story lines that take familiar tropes and start defying our expectations.

For example, most monsters or supernatural beings come out at night, alone. There’s a scene in the movie in which the main character, Amelia, goes to the police to complain about someone stalking and harassing her family. The Babadook — ever so subtly — makes himself known. The Babadook’s cloak and hat are hanging on a peg in the corner of the police station next to a uniform. Amelia turns away and walks out. 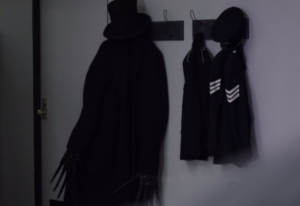 That’s one of the things that makes this monster what it is: it’s there. In broad daylight, but most people can’t see it or don’t want to see it. The main character in the movie spends half the film denying the monster is even real. She thinks her son’s bizarre behavior is acting out on account of the death of her husband, his father.

The other big surprise came at the end of the movie. Most monster stories are classic Hero narrative: you slay the dragon and then live happily ever after. The refrain, repeated the entire movie, is If it’s in a word, or it’s in a look, you can’t get rid of The Babadook. The hint was there the entire movie, but it’s still creepy and surprising when, after The Babadook is vanquished… he’s still there. Amelia is keeping it in her basement, locked up and well-fed. The writer and director, Jennifer Kent, was telling us the entire movie: you can’t ever get rid of him.

That’s why I’m ashamed to say I didn’t understand why the LGBT+ community embraced The Babadook. It’s what so many people who are queer must feel like: they’re always there, but denied and on the margins. The fact that they’re different is a monster which goes unrecognized if possible, and any behavior which points to its presence is explained away as something else. It’s not something you can simply be rid of by defeating it. It’s not going away.

This is one of the wonderful things about stories: once they’re out in the world, we make them our own in wonderful ways. I’ve had people come up to me after watching some of my theater work, telling me how they loved a character for an aspect I had never even considered. Every indication is that Kent didn’t intend for The Babadook to be a kind of queer allegory. It doesn’t really matter, either. If anyone sees a film and identifies that a character goes through something they have gone through, isn’t that what a story is for?